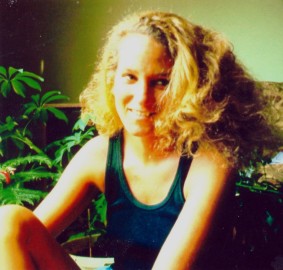 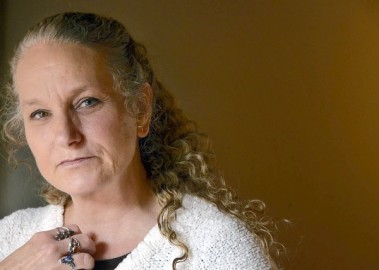 Annapolis, MD — 1/3/12 — md-ar-book-p02-davis — Jennifer Wheatley-Wolf, 53, of Arlington, VA, has written about her rape case with the chief investigator, David H. Cordle, Sr. The book, “One Voice Raised: A Triumph Over Rape,” describes her experience and the 20 year search to find the rapist who attacked her in 1988. Amy Davis [Sun Photographer] #0343

On January 13, 2010 I testified against serial rapist, William Joseph Trice.

This excerpt describes  the moment, 22 years after the crime, when I saw this man’s face for the first time.

It was a really cold morning. The sun was bright, but it wasn’t offering any warmth. Glaring reflections of gold sparkled off the store windows and car bumpers shone with silver light. There were frozen puddles in the brick street. “Ego Alley,” Annapolis’ harbor area, was covered in a film of ice. A flock of seagulls circled around the boats in the harbor looking for a spot to make a clear landing. There were a few young people in the cyber café staring at their laptop screens and drinking coffee. Most of the stores on Main Street were not open. The street was mostly deserted, except for the trash men who were picking up bags from in front of the shops and a few men working on some telephone wires. Chick and Ruth’s Delly was busy with people having breakfast. A line was forming at the ATM machine.

It was just like every other winter morning in Annapolis.
It was like no other day in my life.
It was a day I had never imagined dawning.
It was the day I would be seeing, for the first time, the face of the man who had raped me.

I could have heard a pin drop when I walked through the courtroom door. I was alarmed at how much bigger the room appeared to be now that it was full of people. It didn’t seem this large the other day, I thought. How could that happen? Shouldn’t it feel smaller? Closer?

In fact, the room had taken on the feel of a fun house. Judge Hackner sat at his bench straight ahead, but he looked to me to be out on the fifty yard line of a football field and sitting way up high on a mountaintop. I was feeling small. I felt I would be engulfed by the space. I quickly glanced at the benches where the jury sat. They had all turned their heads to look at me as I entered the room. I looked away and my gaze passed over the benches where my friends and family members sat, behind the State’s table where Kathleen was headed. I didn’t want to look at anyone here too closely because I thought I would get too emotional. I didn’t want to fall apart. My eyes darted to the opposite side of the room and I couldn’t help but notice there were very few people sitting on the benches behind the defendant.

The balance of the room felt all wrong. Physically there were many more people sitting on the left side than the right and yet the floor seemed to be listing toward the right; tipped as if being weighed down by an invisible force toward the defendant’s table. The area around the defense table looked dark and uninviting, but I felt myself leaning into the tilt of the floor as if being sucked toward the shadow that hung there. I tried to straighten myself.

As I passed the seats where all my supporters sat, I was aware of a charged energy that was light, warm, and safe. I walked into this light and wanted to stay there. I couldn’t. I was being instructed by someone to approach the bench where the court stenographer sat. I didn’t want to walk toward her because I would have to pass through a section of the room that was dark and oppressive.

I felt dwarfed by the judge sitting way up high. I was being swallowed by the room with its heavy mahogany wood and thick carpet. I felt overwhelmed by what was expected of me. I took a breath and walked forward, being careful not to stumble. All eyes were on me. I could feel them. It was so quiet. I heard only a sniffle or two.

There was nothing inviting about this. The air felt heavy and thick.

I saw his face in profile. He was staring straight ahead with his hands in his lap. His features were sharp; a thin face with protruding cheekbones, a goatee, a widow’s peak, and a receding hairline. His complexion was pale. Way too pale to support hair and a beard that looked to be poorly dyed with inky-black shoe polish, and slicked back with Vaseline. Unnatural. Instantly I understood completely why he’d dyed his hair. I was sure it would soon be very clear to the jury. 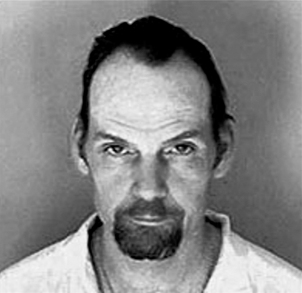 As I walked by the corner of the defense table, I was careful not to brush the edge. Darkness hung heavily in the air around the three people sitting there. I did not want to pass through it.

The stenographer stood and started to speak. Even this was odd. Instead of looking into my eyes when she spoke, she seemed to be looking at something just above my head behind me. I resisted the temptation to twist around to look up and see what her eyes were fixed on. Is she blind? I wondered.

“Do you solemnly declare and affirm under the punishment of perjury that the testimony given will be the truth, the whole truth, and nothing but the truth?

I was thirsty. I was beyond thirsty. My mouth was so dry I was afraid I was going to start to cough uncontrollably. I wanted something to drink; I wanted a mint in my mouth. Kathleen started asking me her questions

I have no idea how long I was on the stand. The collective energy I felt when I entered the courtroom, coming from the 12 women there with me, grew stronger as I got further along in retelling the events of August 21, 1988. What I recognized as a comfortable and inviting light when I entered the courtroom became an energizing wave that continued to roll toward me — like an ocean — while I was on the stand. This wave calmed me and filled me.

Trice never met my eyes while I was on the stand. It was uncanny how, no matter when I looked at him, he was always focused on something else in the room. Maybe his lawyer told him not to look at me at all. Maybe he didn’t want to look at me.
But I wondered as I looked at him, “Does the face you are born with determine your fate? Or does the life you lead imprint itself onto you? Do lines etch and features reposition until you look the part of the role you have chosen for yourself? I’m not sure but I was struck by how his face told the story of his life. If I knew nothing about this man, and had seen him walking toward me, I would cross the street. If our meeting were in a dark alley, I would run in fear.

Each invasion, every surprise attack, and every scream he elicited from a terrorized victim echoed from his eyes. His eyes were light in color and ice cold. What must have once been smile lines in childhood had become twisted and carved into a sneer. His jaw was set and closed tight, giving him an angry look. If he had been a Hollywood actor, he would have been type-cast to play every role of sexual predator that came along. His face was one that conjured nightmares. No matter who he was as a child, his choices in adulthood had made him the bogeyman. He was surrounded by dark and evil-looking shadows.

The longer I spoke the more I felt his happiness fade. What had been joyful for him at the start had become a disappointment. I have no doubt he sensed the strength I garnered from telling this story. He had to have been aware of the purifying energy that surrounded me, but never made its way to his table. I have no doubt he realized, by the time I reached the end of my testimony, that I was not the small and frightened girl he had left face down on the bed twenty-two years ago.

The longer I talked, the further along I got in my story, the darker the air around him became. In contrast, the rest of the room was alive in a bright light. This light swirled and danced around the room touching every other person. There were no windows. It wasn’t coming from outside. The light was, I believe, the collective energy, love, and strength of the women in the room. The light was freeing, empowering, and uplifting.
I felt I had grown 12 feet taller when I exited the courtroom.

‘One Voice Raised: A Triumph Over Rape’ Winner of the 2013 ELit Bronze Medal Winner/True Crime!     (Available on Amazon in Paperback and Kindle)  To find out how my case was solved and hear from the detective who stuck with me for 20 years,  order your copy today.

Thank you to the thousands of people all over the world who have read my story. Thank you also to the survivors who have shared your story with me and continue to stand up and speak out against rape and sexual assault. We make a difference.

If you are interested in having Dave Cordle and me present my case at your conference, women group or club , please send an email to CurrentTomePublishing@yahoo.com.