It’s funny how life throws stuff at us and, without even realizing it we find ourselves a part of a much bigger picture.

I have been mulling around how to begin my presentation for the End Violence Against Women (EVAW) Conference in Seattle next April. I know, I have lots of time to get this finished. But, it doesn’t feel like lots of time.

Lots of time was the 21 years it took to solve my rape case. That was lots of time. In fact, it was long enough for me to work through the terror, PTSD and rebuild my life one painting, one photograph and one quilt at a time.
I’ve grown up, grown older, gotten married and have even written a book about all of this. 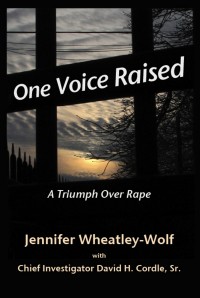 I wrote-One Voice Raised: A Triumph Over Rape (Amazon) in approximately 3 months. That was easy. No, really it was.
Everything was there in front of me for 21 years. All I needed to write the book was a face and a name for the final chapters, That was the missing piece all those years. I didn’t see the face of my attacker. He threatened to kill me if I looked at him. I could not identify him. Once my case was solved, everything fell in to place and the book practically wrote itself.

The EVAW Conference draws professionals from every aspect of abuse, sexual assault, stalking and human trafficking. It’s odd to think they would want to listen to one more survivor’s story. What could I possibly tell them that they don’t already know?

I have been fortunate in that I have met many of the people who were involved in my case. Some as far back as 1988 and some from 2005 until 2010. This is pretty cool. I remember talking with a woman who processed DNA from my rape kit. I said I thought it must be wonderful knowing the work she does helps to convict (or exonerate) so many. I was shocked to hear her say that rarely does she get to know the outcome of a case or what purpose the evidence served. Unless it’s a high-profile case that makes it’s way into the newspapers, they plug away at their job and never see how the work they do changes lives.

I guess I just found a good way to start my presentation. I have to trust in myself to know where to go from there.